Book Review of The 99 Names of God by Rabbi Yonassan Gershom, originally posted on Notes from a Jewish Thoreau 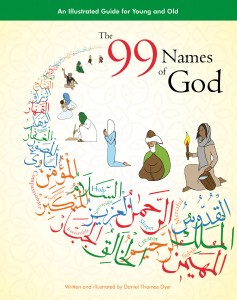 Daniel Dyer, author and illustrator of this beautiful children’s book, has created a wonderful set of lessons for connecting with God’s presence in the world around us. Although The 99 Names is intended for Muslim children, it’s really a treasure for all ages and faiths. In fact, it could be used as a basic primer on spirituality, and would be a fine addition to any religious library. I defy anyone to read this book and not come away with a deeper appreciation of God’s presence in the universe.

In a time when there is so much misinformation (and hostility) about Islam in the Western world, this book goes a long way toward opening a window on what true Islam is really like. If there’s one thing Jews and Muslims have in common, it’s the plethora of hostile websites claiming to “unmask” us by taking quotes out of context and compiling lists of every negative thing ever said by any of us anywhere. For years it has been an uphill climb for me to convince non-Jewish readers that we Jews even have any spirituality. Recent dialogues with Muslim teachers have shown me that they, too, have this same struggle. Hence my delight in finding this very accessible book.

The author begins by explaining that Allah is simply the Arabic word for God. In Arabic-speaking countries, non-Muslims — including Christian priests — also call God “Allah.” This is an important point, since many Christians in America assume that Allah is a separate deity from the Creator in Genesis. I have more than once been told that Muslims worship Allah, not God, which is as absurd as saying that Germans worship Gott and the French worship Dieu as separate deities. In fact, “Allah” comes from the same Semitic root as “Elohim,” the name of God used in the first chapter of Genesis.

Here again, Muslims and Jews have something in common, namely, the distortion of our God-language in the American public mind. Non-Jews tends to think of the “Jewish God” as an “angry Jehovah” (which, by the way, is not how YHVH is pronounced) and some even go so far as to claim that Jews don’t believe in God at all. The “Muslim God,” Allah, is seen as nothing but a cruel warmonger. Both of these are negative stereotypes that purposely disguise the fact that all three Abrahamic religions — Judaism, Christianity, and Islam — worship the same Creator of the universe.

This book serves as a primer for teaching us that true Islam is indeed a peaceful, reverent path that respects all life. Dyer, who is a British convert to Islam, was initially attracted to the faith through the poetry of Jalal’u’Din Rumi, a thirteenth century Persian mystic and scholar who taught: “Christian, Jew, Muslim, shaman, Zoroastrian, stone, ground, mountain, river, each has a secret way of being with the mystery, unique and not to be judged.” Rumi saw the evidence of God’s presence everywhere. This poetic universalism comes across in the book, teaching children to build bridges, not walls, among the faiths and peoples of the world.

Each lesson in The 99 Names has one or two Names (depending on context) in Arabic calligraphy, transliteration, English translation, and a quote from the Quran using the Name. This is followed by a simple but meaningful explanation of how that aspect of God is manifested in the world around us. Also included are teachings and stories from the Prophets and various Muslim sages, both male and female, and positive references to other religions.

Most non-Muslims (including me) would be hard put to name 99 different attributes of God — which is what the Names really are. God is the Compassionate, The Merciful, the Sovereign, The Holy, the Source of Peace… and so many more. This, I believe, is a great gift that Islam has brought to the world at large, to remind us of how many different ways God manifests his/her Presence. All too often, we limit God to a single attribute — such as Love or Peace — and forget how all-encompassing Omnipotence really is. Love is an attribute of God, yes. But God is so very much more.

I have gained a lot of new insights from contemplating the lessons that author Daniel Dyer sees in these Holy Names. As author of a nature blog, I especially like the way the lessons connect the Names with nature, encouraging the reader to look for God’s ways in all things. (The nature photos here are my own, not from the book. They are examples of how I see God/Allah’s presence through the eye of my camera.)

Once again, Muslims and Jews are on a similar quest, to bring our urbanized children more in harmony with the wonders of God’s world and our responsibility to care for it. This is where all people can come together in harmony, since we live on one earth. (I was also happy to read that Muhammad loved cats. Readers of this blog know that I do, too!)

Each lesson has a “Signs of (Name)” section, with many examples taken from nature. The cat, for example, is Watchful, pairs of geese are Faithful, a sunrise is Glorious. The lessons also have a “Reflections and activities” section where children and parents can discuss/do things together. As author Dyer explains in his introduction, “No answers are contained in this book. The important thing is that we learn to ask questions, reflect, research, and discuss with others to arrive at out own considered point of view.” Rather than being a book of dogmas, it is a map for exploration. I highly recommend it.