Aussie-super-mum, Stephanie Boyle, reflects on the Ramadan countdown she and her son, Ayman  (5 years old), undertook this year with the help of our book, The 99 Names of God. We hope you enjoy reading and feel inspired to do something similar next year! 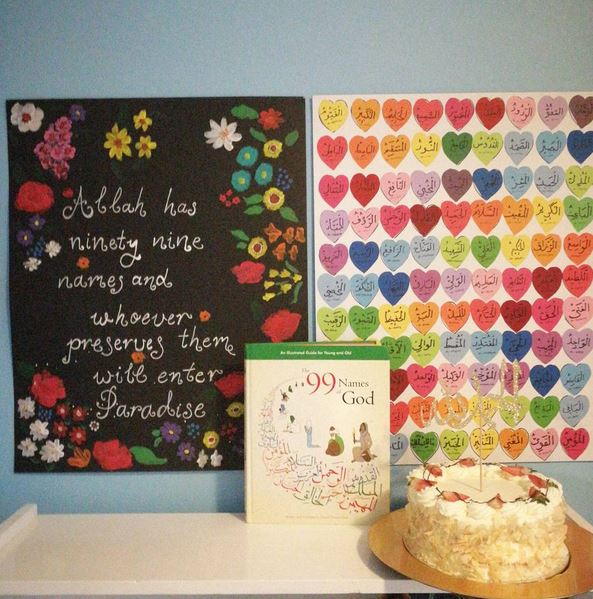 At some point throughout those first heady days, weeks and months of motherhood a sudden and alarming revelation makes itself known. With a tiny new soul so completely and utterly dependent upon you 24 hours a day, your spiritual life as a mother can appear to have vanished or at least have been extremely compromised overnight. The days of praying on time, at a time convenient to you and praying extra rakat, of attending lengthy classes, halaqa or nighttime lectures, of devoting extra hours to reading Quran, attending terawih and generally worshipping during Ramadan and of devouring complex religious texts are now behind you. At first this realisation can be overwhelming. How can you possibly be the perfect mother to your child, whose life has been placed in your hands as a sacred amanah when you struggle to perform even the most fundamental aspects of your faith? How can they possibly look to you for leadership and example when you are riddled with doubt over whether you yourself are performing sufficient acts of worship? 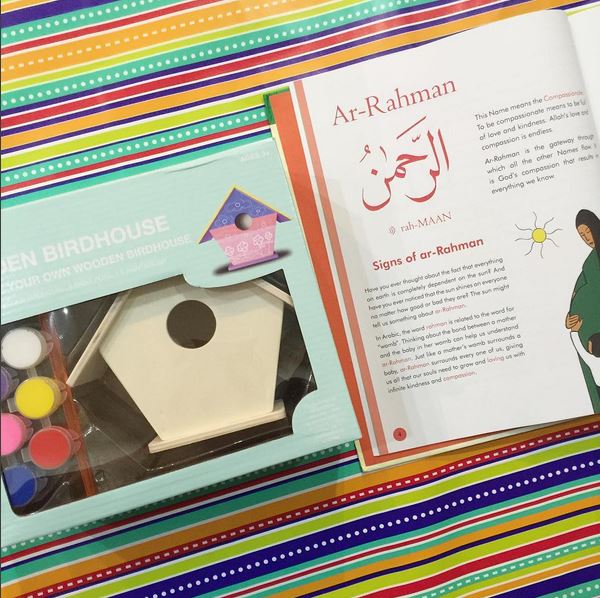 Sheikh Nuh Ha Mim Keller wrote so eloquently on the subject and his words gave me enormous comfort when I first discovered them and they continue to do so. He said that, for a mother, ‘When Allah opens her understanding, she will see that she is engaged in one of the highest forms of worship, that of producing new believers who love and worship Allah. She is effectively worshiping Allah for as many lifetimes she has children, for the reward of every spiritual work her children do will be hers, without this diminishing anything of their own rewards.’ Despite this message of comfort, despite the immense value of our most mundane, routine actions as mothers, there remains an unshakeable feeling of not doing enough and not being enough.

As the months turn to years, and your child asserts their independence, most of us manage to reclaim some of the aspects of our spirituality that we previously enjoyed and yet, for most women that I have spoken to, and in my own experience, the rich connection with the Divine, generally achieved through quiet contemplation, remains compromised and out of reach. Guilt has been my constant, albeit quiet companion for my 5 years of motherhood even though motherhood itself has led me to a state of gratitude and love for the work of our Creator I had never experienced previously. 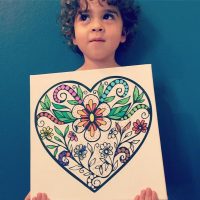 And then suddenly, almost overnight, my child reached an age at which for him, Islam was no longer just an abstract concept and he showed a thirst for knowledge and I set about teaching him. As I searched for and collated Islamic resources, finding some wonderful things here and there and some others less than fantastic, I realised that I would need to channel my creativity into the task if it was to be a satisfying experience for both of us. As I pondered my role as teacher more, my excitement grew as I recognised an additional opportunity to pursue and enhance my own spirituality via my children. After all, in order to teach something you must first possess a deep understanding of it yourself and explaining complex concepts in a language that makes sense to children can bring you to a state of clarity that you may not have otherwise reached.

The Asma ul Husna have, since my conversion over 15 years ago, always been for me an incredibly powerful means of getting to know my Creator. Seeing the manifestations of Allah’s names reflected in the world all about me was a profound and meaningful confirmation of my faith and an enormous comfort. From the very beginning I knew that I wanted to share these most beautiful names with my children but struggled with the most appropriate way to do so. Some of the concepts were so challenging that I had no doubt I’d struggle to explain them to another adult let alone discuss them at a level appropriate to a child, albeit one with advanced comprehension skills. I also to be honest, lacked the motivation to deal with this enormous task. I half heartedly purchased books for adults on the 99 Names, printed out uninspiring flashcards and coloring in sheets and that was as far as I got. I pondered the lack of books for children on the subject and thought about what such books would look like but ultimately I moved on to other topics that were discrete, simple, and which lent themselves clearly to activities. 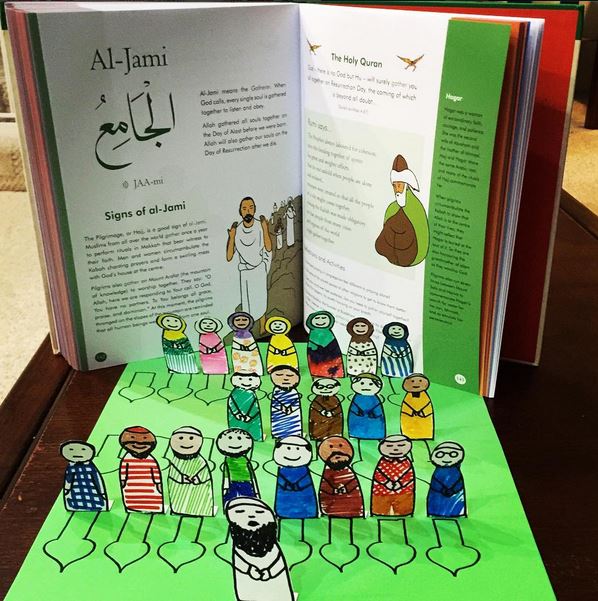 Perhaps four or five months before Ramadan this year, a new publication popped up in my Facebook feed – The 99 Names of God by Daniel Thomas Dyer. So hungry am I for Islamic children’s books that I jumped at the opportunity to purchase the book and did so immediately. I bought two copies – one for our home library and one for a good friend with two sons as a housewarming present. While Facebook didn’t offer me much in the way of a synopsis, I had an incredibly positive feeling about the book. It looked beautifully put together and looked as though it would strike an appropriate balance between simplicity and sophistication making it a valuable resource for the entire family. The books arrived in due course and being extremely busy and consumed by daily life, my copy sat sadly neglected in my bookcase. Then, as I sat one evening scrolling through Instagram, I noticed a post by Razeena Omar Gutta of Read Little Muslims, reminding us of the 100 days remaining until the beginning of Ramadan. It was the final prompt I needed to embark on the project I’d long wanted to do with my eldest son, exploring and learning all about the 99 Names of Allah swt. Completely spontaneous but with the best of intentions – I don’t think it could have happened any other way – we jumped straight in.

I decided from the outset that if I were simply to read the names to Ayman, my 5 year old, and explain them using our beautiful new resource and if our goal was simply to memorise the names rather than internalise their meaning, the project would fairly quickly peter out and it would lack value to him. My mission was to provide Ayman with as much love for the names as I have myself and for him to move forward witnessing the manifestation of Allah’s names and attributes in all he sees around him. In my state of excitement, being highly motivated and blindly ambitious (particularly given I had recently had my third child and was stuck deep within that newborn haze of sleep deprivation and round the clock feeds), we therefore began completing an activity a night that related to the name of the day. In my heart, while I wanted this to work so very much, I had a feeling that some names would not readily lend themselves to craft, art or science experiments, particularly not those aimed at preschoolers! 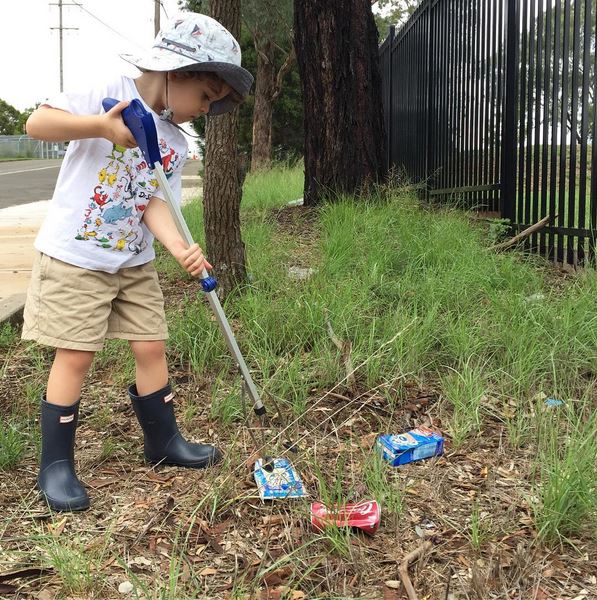 However, as our project unfolded I was surprised and delighted to find that opportunities for complimentary activities simply kept presenting themselves. It was as if it was meant to be alhumdulillah, as if purely by having the best of intentions, Allah swt had helped us to carry them out. Our completion of the names then was not in any particular order, but simply as inspiration struck. I aimed to have our activity either relate to the manifestation of the name in the world around us or to highlight the meaning of the name itself. The 99 Names of God book provided us with so much assistance in this regard. The discussion questions, relevant quote from the Quran and of course the explanation of the name often provided the inspiration I required for our activity. Other times inspiration came from the most unlikely sources – museum exhibitions, works of fiction, Ayman’s current general interests and even movies. We went on nature walks, conducted a treasure hunt, studied mathematics, enjoyed a true or false quiz, collected rubbish to purify our environment, painted and drew, conducted science experiments and went fruit picking. The activities were extremely diverse and they were often things that we could all enjoy as a family so that even my younger children and husband could join in. This diversity made our days, weeks and months move swiftly and there was never a time when I felt as though the project was dragging along. To my pleasant surprise, Ayman began to look forward to our activity as one of the highlights of his day. More than once upon awaking he would ask me what the name of the day was and what we would be doing to learn about it. This joyful enthusiasm meant that even on days when I was fatigued, busy or distracted I was rejuvenated. 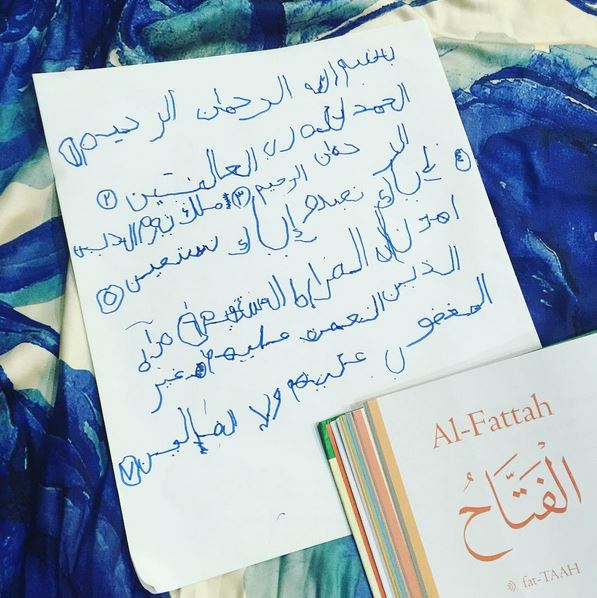 When I questioned Ayman about what activities were his favourite, he said with a most beautiful sincerity that they were ‘all his favourite’. For me however, the most meaningful names were the ones where I could clearly see that Ayman had comprehended their meaning perfectly and then interpreted that meaning within his work. For example, the poem he wrote for Al Hamid, inspired by the words of Rabiah, was extraordinarily touching. Similarly, the patience and care Ayman exhibited when transcribing Al Fatiha when we looked at Al-Fattah was remarkable and unforgettable.

To mark the progress our project I created a poster upon which I drew 99 hearts. With each name we completed, I wrote the name upon a coloured heart and we stuck it on our poster. It became a beautiful reminder of how far we’d come and a motivation to reach our goal. As that poster filled up with hearts of every hue, our own hearts felt fuller, cleaner, purer. While Ayman and my other children slept at night I painted another, very quick poster featuring the exquisite hadith, ‘Allah has 99 names and whoever preserves them will enter paradise.’ Even though it was rushed and not the perfect reminder I wanted to gift Ayman to celebrate his efforts, it was nonetheless heartfelt and I was profoundly touched by these words of the Prophet pbuh and hoped that they would be equally as meaningful to Ayman. 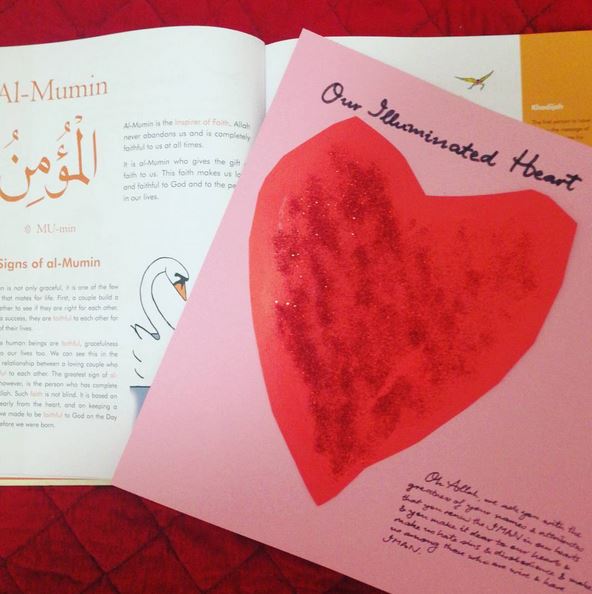 Our final name happened purely by coincidence to be Al-Mumin, the inspirer of faith. It was a most perfect place to conclude. Ayman learnt the beautiful dua, ‘Oh Allah, we ask you with the greatness of your names and attributes that you renew the iman in our hearts and make us hate sins and disobedience and make us among those who are wise and have iman.’ Not only did this relate to Al-Mumin, it could be said to summarise my hopes and wishes for the project in its entirety. This wonderful project has highlighted to me the great joy, richness and heightened iman that can be achieved through sharing Islamic knowledge with your children. It was also perhaps the first time since I became a mother that I achieved that closeness to Allah swt that I had only previously enjoyed via quiet contemplation and private worship. It has been a beautiful reminder of the many varied paths to Allah swt that exist around us if only we take the time to explore. It is evident to me that we would have not embarked upon this particular journey had we not been gifted this beautiful guide, The 99 Names of God. I have no doubt that it will continue to inspire many more beautiful discoveries by both our family and all those who are blessed to have it as a part of their libraries.